skip to main | skip to sidebar

And now for your halftime entertainment... 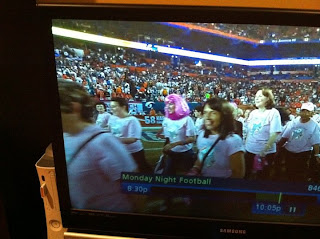 Chemosabe Cristal: International TV star. (thanks W for the pic!)

(There I am! Just to the left of the lady in the pink wig).

As part of Breast Cancer Awareness Month (or, as I call it, October) the NFL is going pink to support Making Strides Against Breast Cancer. Late last week I received an e-mail from my local Komen affiliate saying that the first 100 survivors who replied would get a free ticket to the Monday Night Football game for the Dolphins vs Patriots and be on the field for the halftime show at SunLife Stadium. You bet I jumped all over that! And lucky for me, the median age of breast cancer patients is 61 so most of the survivors aren't as tech-savvy as a 29 year old with an awesome new smart phone.


They brought us down to the sidelines and had us line up while the players finished the first half of the game. Then a bunch of cheerleaders sporting pink performed while Kelly Rowland (of Destiny's Child fame) sang a few of her songs. When Kelly busted out with "Survivor", we walked down the field and the dancers unfolded a giant pink ribbon. Then the show was over and we were ushered off the field. It was such an exciting whirlwind of a night, and I can't believe I had the opportunity to be on the field!
Posted by Cristal at 7:54 AM

Cristal
When given the choice, I always take the stairs. I sometimes wonder if I have enough soy sauce at home. I practice the ancient art of mood levitation. I have killer boobies (they are literally trying to kill me). I am the lead singer in an air band.